It was an American Nurse’s sensitivity to an antiseptic that led to the development of rubber medical examination gloves. The year was 1890 and the hospital was John Hopkins in Baltimore. Sympathetic to the Nurse’s plight, the chief of surgery asked a rubber company to develop protective gloves.

While today medical practitioners wear rubber gloves around the world, the practice was unheard of before 1890. The invention of medical examination gloves played a pivotal role in stopping the spread of germs and saving lives. 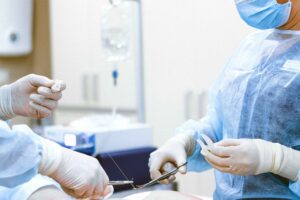 If you have ever wondered how these stretchable medical gloves, used for surgery and examination are produced, let us walk you through the whole process of how examination gloves manufacturer produce these protective gloves for healing hands.

The entire process can be categorized into three main steps;

It takes a lot to produce these gloves on a mass scale, starting from artificial hands made from ceramic or aluminum which serve as molds.

The whole process kicks off with the sterilization of artificial hands. It’s important that the molds are cleaned thoroughly and there is no residue left on them which could possibly contaminate the gloves. Even a tiny speck could create a whole lot of trouble considering that these gloves could be used in a critical surgery. So the molds are first washed in soapy water first and then with bleach which is known for its ability to kill harmful germs.

One might think that washing the molds twice would help get rid of any particles on their surface but apparently, that’s not enough and they are then sent to be cleaned by giant revolving brushes. These brushes also clean the surfaces that are hard to reach i.e. between the fingers.

The dried molds are dipped into a chemical that forms a film on their surface. This is a critical step in production as the liquid rubber won’t adhere to bare ceramic. This layer of the chemical substance ensures that it holds on to the molds’ surface.

The rubber is warmed up and collected into a large container. To make sure that the final product is strong enough for medical use, the rubber is enhanced for increased strength. Once the mixture is ready, molds are dipped into it.

The liquid rubber reacts with the chemical coating and becomes gel-like but it doesn’t completely solidify which is why the molds are heated into an oven where they are baked under intense heat and dry to the hand form. The gloves then undergo the vulcanization process under which the rubber is heated with the Sulphur accelerator and activator. This is done to further improve gloves’ elasticity, resilience, tensile strength, viscosity, hardness, and weather resistance.

After a wash and dry, the gloves are collected from the ceramic forms to be tested, packed, and distributed into the market.

This whole process is adopted by the manufacturers to produce top-quality gloves from synthetic rubber. The other option is the natural latex rubber which may seem like a better option but a lot of people cannot wear them due to allergies.

The gloves have to be removed manually from the molds because they are stickier than their latex counterparts.

On the contrary, natural latex rubber gloves have their own benefits one of which is, they are not as sticky and come off easily from the molds with a burst of air.

To check the quality of the gloves, workers, stretch and inflate the gloves. The last thing you want is for your glove to come off or tear during examination especially when dealing with contagious diseases, which is why gloves are tested for quality before they are packed and shipped.

But what of the tiny holes which cannot be spotted by a naked eye? To check that, the gloves are filled with water and checked for leaks the good old-fashioned way. The whole batch is rejected if a leak is detected in the sample gloves.

Living with someone who is infected, under the same roof can be extremely challenging. One has to approach the patient with great caution. That’s where these gloves come in.

While the virus has left the world in high demand for disposable gloves, the producers are struggling to cope up and have stepped up their efforts. What’s important is, ensuring that in their pursuit of higher production, the companies don’t end up dropping the quality as it would compromise the gloves’ ability to contain the virus.

For those of you unaware, these gloves can be used for more than one purpose. The fact that they are disposable and cost-effective, makes them highly sought-after gloves for both medical as well as non-medical usage. From food vendors to cleaning, a lot of people have found the perfect use for these gloves overtime for their respective professions.

If you are looking to get in touch with an examination gloves manufacturer as a wholesaler or an investor, there are plenty of them in Malaysia.

No comments to show.