Despite all the skepticism, one thing that has been widely preventing the spread of covid-19 among the medical practitioners and the general public is the use of Personal Protection Equipment (PPE) including masks and gloves. 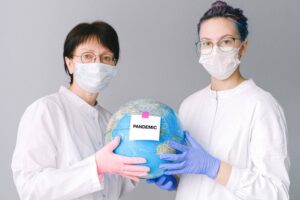 While using gloves may be a relatively new phenomenon among the general public but they have long been a vital part of the medical practitioners’ outfits and for a good reason. Hospitals are the hotbed of all sorts of germs and diseases, which if not dealt with caution, could spell disaster.

The efficacy of medical examination gloves against the spread of germs and diseases is already established but despite their soft and comfortable nature, not everyone is comfortable using the good old natural rubber latex gloves. Here is a look into the key driving factors behind the exploration of alternative material for medical examination gloves.

During the notorious AIDS outbreak in the world, the demand for latex gloves surged exponentially, to match the growing demand, a large number of new manufacturers entered the market. Despite their future-forward vision, these new players lacked the skill or the motivation to produce gloves resulting in faulty products having an excess of latex protein.

This caused a lot of medical professionals to develop latex allergies and a whole bunch of other problems. The thing about latex allergies is, once someone becomes sensitized to it, will continue to be sensitized each time they come into contact with it.

Although the protein levels in the gloves that are being produced today are significantly lower making it unlikely for someone to become sensitized to these gloves, a lot of countries are still hesitant and have banned them altogether.

Despite the fact that latex gloves offer incredible protection against germs and diseases, that’s still not enough to convince the laboratory and industrial workers who have a greater risk of exposure.

Since natural rubber latex (the raw material used for latex gloves manufacturing) is derived from a tree, it did not cost much to produce. The only cost was that of the labor used for collecting it, but that is not the case anymore. The demand for rubber has exponentially increased over the years and the trees are not productive as they used to be.

India and China have been among the top 10 natural rubber producers in the world. Both these countries have been focusing on developing their automobile industries. A large amount of rubber they produce is being used in tire manufacturing.

So the natural rule of demand and supply applies here, meaning the drop in supply has caused the rubber prices to increase.

This significant price hike in the natural latex rubber prices is another reason that the users are now turning to its alternatives.

Before we explore the potential materials, which could replace latex, we need to bear in mind that the material needs to at least have similar protection properties if not more and it should be easy on the skin, as it would have to be worn for an extended time. Moreover, pricing is another major factor. Choosing a costly material would ultimately reflect in the retail prices which would be a whole new problem in itself.

The materials available are:

Vinyl – PVC is a popular material and is widely used in the construction industry. It may seem like a material that can be used in latex’s stead but the fact of the matter is, their benefits far outweigh their cons.

Vinyl gloves have poor resistance to chemicals and although they have a very low production cost, their impact on the environment is a huge concern.

A large number of manufacturers are now turning to Nitrile as it has proven itself to have amazing chemical resistance. It is soft and does not cost a fortune making it a highly reliable material for examination gloves.

It has not been long since the nitrile gloves have made it to mass production so there are not a lot of manufacturers who are exploring this material yet but the future looks promising for nitrile gloves as new players are rapidly entering the market and looking to capitalize on the new material.

Nitrile has several advantages and in some cases, it even surpasses latex in its utility.

The first and foremost benefit it has is the price. Nitrile gloves cost just as much as latex and still do a great job at offering protection and containing the spread of germs.

Comfort is a major concern for the consumers so it is not something that can be overlooked. Luckily, nitrile is incredibly soft on the skin and does not cause any sort of irritation.

Anyone who has ever worked while wearing gloves would acknowledge how difficult it is to perform certain tasks with gloves on. While this might not be a critical factor in other jobs, for medical practitioners the gloves’ tactility can make the difference between life and death. Nitrile offers great tactility making it easy for the workers to carry out their day-to-day tasks.

The increased heat dissipation property of nitrile means that it prevents excessive sweating and does not cause irritation on the skin, which is a huge problem, especially in hotter regions.

Nitrile gloves are significantly thinner than latex gloves so much so that they take up half the space it takes to store and transport latex gloves. This naturally reduces the cost of transportation and storage of these gloves along with the carbon footprint hence increasing the profit margin. The same goes for when these gloves need to be disposed of, they take lesser space in landfills and have a lower emission which is a growing concern from the environmental point of view.

Contrary to the popular belief that medical examination gloves are only used by hospital or laboratory workers, these gloves have a wide range of applications. One of the industries that have found a use for them is the Food industry.

Presently, vinyl gloves are regulated and are used in food preparation but recent studies have found them to be harmful as they contain plasticizers that get transferred to the food during preparation. Nitrile is a better contender and offers greater protection when it comes to food safety.

Medical and industrial workers still remain the biggest beneficiaries of medical gloves and they need greater protection as compared to the workers in other industries especially in a time when a global pandemic is wreaking havoc across the world.

Hospitals and laboratories are increasingly becoming aware of the benefits of choosing nitrile gloves as compared to their latex counterparts because at the end of the day they need to keep their staff’s best interests at theirs. Moreover, they could be looking at expensive lawsuits if a patient got infected with some disease by mistake.

No comments to show.